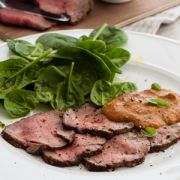 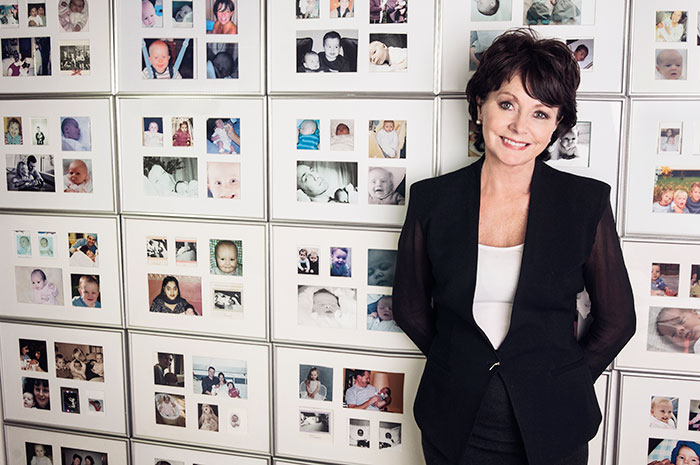 From Zita West’s Eat Yourself Pregnant.

Zita West is the UK’s most trusted expert on fertility. In her new book, Eat Yourself Pregnant, she explains that even though conception takes place in the woman’s body and she will carry the baby, we now know that half of all fertility problems are down to what’s going on inside the man. In this extract from the book, Zita gives important nutritional advice for hopeful fathers-to-be.

In some ways men are luckier than women – whereas a woman is born with all the eggs she will ever have in her lifetime, a man will produce sperm 24 hours a day for seven days a week. While there comes a time in a woman’s life when she is no longer able to become a mother, a man can become a father (in theory) until his dying day. Nonetheless, studies show that men shouldn’t become complacent. Here, I want to focus on what’s going on inside the man’s body and show you why it’s so important that fathers follow a healthy diet, too.

The structure of sperm
The sperm cell is much, much smaller than the egg cell and consists of the head (which contains the genetic material), the mid-piece (which is the energy powerhouse of the sperm) and the tail (which propels the sperm forward). The head of the sperm is covered with a cap called the acrosome, a fine membrane that is vulnerable to damage and has to come off before the sperm can penetrate the egg.

Making sperm
The most important role a man has in the process of babymaking is to deliver healthy DNA via sperm carried in his semen. Most of the fluid in semen is made up of secretions from the male reproductive organs and contains citric acid, amino acids, fructose, enzymes, prostaglandin, potassium and zinc. Semen is slightly alkaline.

Sperm are made in special tubules, called seminiferous tubules, in the testes. It takes around 100 days altogether for each sperm to become fully grown – 74 days for a single sperm to develop, before it moves from the tubules into a coiled tube called the epididymis, where it spends 20 to 30 days maturing. Over that time, what a man eats and the lifestyle choices he makes can have their own impact on how healthy each and every one of his sperm will be.

Sperm need enormous amounts of energy. Think of the scale of the journey they undertake relative to their size. From inside the scrotal sac, they are propelled out of the penis into the woman. Passing along the woman’s reproductive tract to get to the egg is like a human swimming the Pacific Ocean. But each sperm not only has to make the journey, it also has to win the race.
Each sperm swims as fast as it can to get to the woman’s fallopian tube first. Once there, the winning sperm has to drill into the egg to download its most precious genetic material.

Forty million sperm or more are ejaculated and begin to make this journey. At ejaculation a large amount of seminal fluid is produced. Sixty-five per cent of it is made up of fructose to give the sperm energy for their journey. The remainder of the ejaculate comes from the prostate and is rich in zinc, which sperm need in order to stay healthy on their journey and to stabilize their DNA.

Despite the millions of sperm that enter the woman’s body, only about 200 will reach the fallopian tube, helped by the woman’s alkaline vaginal secretions. Sperm can usually survive between three and five days once inside the woman’s body.

What is the sperm carrying?
The head of the sperm contains half a baby’s DNA (half the baby’s genetic blueprint; the other half is in the woman’s egg). In the egg, the DNA is tightly packed into an X sex chromosome. Sperm may carry their DNA in either an X or a Y sex chromosome. The sperm’s chromosome pairs with the egg’s chromosome to make either XX (which results in a baby girl) or XY (a boy).

What constitutes healthy sperm?
In each ejaculate there are millions of sperm but not all are normal – in fact, a high percentage is abnormal. To assess the health of the sperm, a doctor will make a semen analysis. This looks at the sperm count (the number of sperm per millilitre of semen), sperm motility (quality of motion) and sperm morphology (shape), assessing the head, tail and neck of the sperm.

Key factors for healthy reproduction are:
• the ejaculate needs to contain more than 20 million sperm per millilitre
• the volume of each ejaculate needs to be 2 millilitres
• more than 50 per cent of the sperm in each needs to be moving properly
• 4 per cent or more of the sperm need to have normal morphology. (Given that only 4 per cent morphology is considered normal, it
is important that all the other parameters are good!)

We can see all these physical characteristics under a microscope, but what the microscope can’t immediately show is whether within the sperm free radicals will have damaged the DNA.

What nutrients do healthy sperm need?
The health of the sperm begins with the health of the semen, which contains 22 different nutrients and is rich in minerals – notably calcium, magnesium, phosphorus and zinc, and vitamins B12 and C. Every man should ensure his diet provides a good intake of these vital nutrients.

Proteins contain amino acids that are essential building blocks for sperm (protein is also an excellent fuel source). Foods containing the amino acids L-arginine, L-carnitine and L-lysine are all important. Those rich in proteins including L-arginine are fish, poultry and red meat, and dairy products. Once in the body, this amino acid helps to produce nitric oxide (NO), which dilates blood vessels and improves circulation. Better circulation to the groin boosts sperm health and increases sperm motility. L-arginine also plays an important role in cell division, immune function and the release of hormones, and good levels may even improve sperm count.

Folic acid (a B-vitamin found, for example, in broccoli, Brussels sprouts, peas and chickpeas) is just as important for men as it is for women because it protects the sperm from DNA damage, including having too many or too few chromosomes (known as aneuploidy).

A number of nutrients help to improve the quality of sperm. Vitamin D may boost motility, while zinc improves the quality of the seminal fluid, and increases sperm count, motility and fertilizing capacity, and decreases levels of DNA damage, structural abnormalities and antibodies to sperm that can impair sperm quality.

In order to provide sperm with all the energy they need to make their epic journey, men need a good intake of L-carnitine. This amino acid carries high-energy fat compounds into mitochondria cells, where they are burned to release their energy. (Vegans should be aware that plant foods contain no L-carnitine, so must supplement.)

Co-enzyme Q10 is another important nutrient for the conversion of food to energy in the cells.
It also boosts sperm motility, because the mid-piece of the sperm needs this nutrient specifically to get the sperm moving and sustain energy to the tail to drive the sperm onwards.

Omega-3 fatty acids (see pages 34–5) are essential for sperm health for several reasons. They give the sperm flexibility, helping the head to penetrate the egg. In addition, sperm cells must have specific membrane characteristics in order to be able to bind to the membrane of an egg and produce a living embryo. Much of those special characteristics come from the sperm’s high levels of omega-3 fatty acids.

Men with poor sperm quality or sperm counts may typically have low levels of omega-3s, or low ratios of omega-3 to omega-6 fats in their semen and sperm-cell composition. Studies indicate that supplementation with omega-3s can improve total sperm count and concentration. One study showed that an omega-3-rich Mediterranean-style diet boosted the chances of successful pregnancy in previously infertile couples by a staggering 40 per cent. Finally, antioxidants are a must – a good intake protects the health of the head of the sperm (which contains the DNA).

What damages sperm?
Apart from sexually transmitted infections, such as chlamydia (which can damage the tubules in which sperm are made and therefore damage sperm) and heat, there is now much evidence that free radicals can damage the DNA that lies within the sperm head. In fact, studies show that at least 30 to 80 per cent of male infertility is linked to oxidative stress (free-radical damage).
It appears that these marauding free-radical cells damage the fatty layers of membranes, such as the acrosome that covers the sperm’s genetic material. (It’s now possible to test for DNA fragmentation – which indicates the likelihood of DNA damage to sperm.)

However, oxidative stress is a natural by-product of generating all the energy sperm need to make it to the fallopian tube. And it’s not only the DNA that can be affected. Free radicals damage all the sperm cell membranes and the mitochondria (that convert food energy into usable energy), too. Studies show that men with elevated markers of oxidation have generally impaired sperm count and more abnormally formed cells.

No matter where in the body free-radical damage has occurred, including inside the sperm, the best treatment is quite simply to boost the levels of antioxidants in your diet. Those with more antioxidants in their diet have higher sperm counts and better motility. A number of specific antioxidants have proven ability to boost sperm quality. These include vitamins C and E (which help to prevent the sperm clumping, giving them better motility and improving the health of sperm membranes respectively), co-enzyme Q10, selenium (especially for healthy sperm formation and motility), n-acetylcysteine (NAC) and zinc. Lycopene is a natural, plant-derived carotenoid pigment that provides the red colour of tomatoes, watermelon and other fruits. It has powerful antioxidant characteristics. Studies have shown that a lycopene supplement can improve sperm concentration and motility and the general health of the sperm. 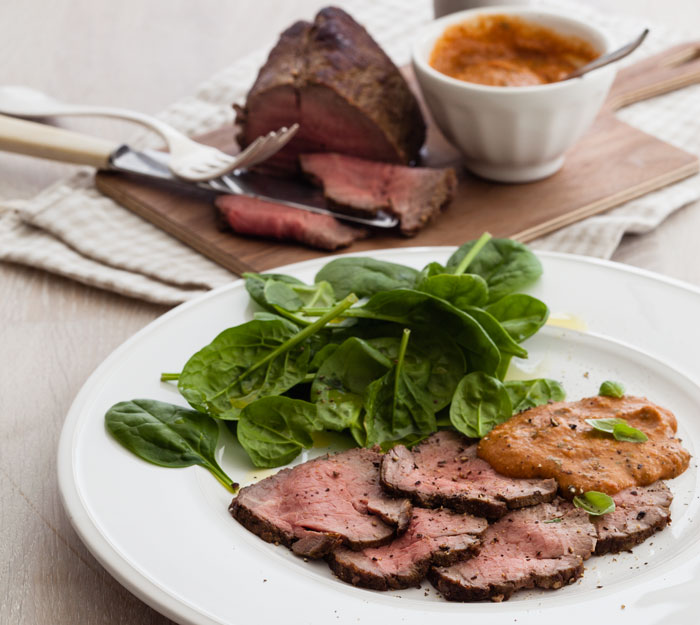 Succulent beef served with a delicious rich tangy garlic and herb sauce makes a sensational feast. Beef is an excellent source of selenium and zinc – both of which are important for testosterone production and male fertility. Organic beef is also particularly rich in a fatty acid known as conjugated linoleic acid (CLA) which has a range of health benefits, including immune support, anti-inflammatory properties, improved blood sugar regulation and reduced body fat. Leftover meat can be served cold with salad the following day.

1. Mix the cumin, crushed garlic and the 2 tablespoons olive oil together and rub all over the beef fillet. Cover and leave to marinate in the fridge for at least 2 hours, or overnight.

2. For the sauce, preheat the oven to 180°C/350°F/Gas 4. Slice off the top quarter of the garlic bulb. Put the bulb on a piece of foil, drizzle over a little olive oil and season. Wrap up in the foil and roast for 40 minutes. Leave the garlic to cool slightly, then squeeze the roasted flesh out of the bulb into a food processor, discarding the skin. Turn up the oven to 200°C/400°F/Gas 6.

3. Heat the 1 tablespoon oil in a frying pan over a medium heat and sauté the shallot, tomatoes and anchovy fillets with the sugar and vinegar. Cook for 5 minutes, then add to the food processor with the garlic and all the remaining sauce ingredients, except the herbs. Blend to form a thick sauce, adding a little water to thin the sauce slightly, if necessary. Transfer to a saucepan and add the parsley and basil.

4. Remove the beef from the marinade. Heat a heavy-based frying pan and sear the beef on all sides. Place the fillet in a roasting tin and roast for 20 minutes until cooked through. Leave to rest for 10 minutes before carving.

5. Heat the sauce and spoon over the beef. Serve with a baby-leaf spinach salad.

Eat Yourself Pregnant by Zita West 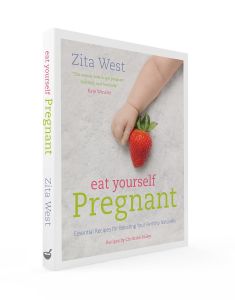 Available for pre-order from Amazon now