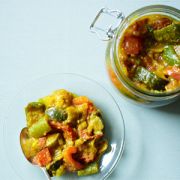 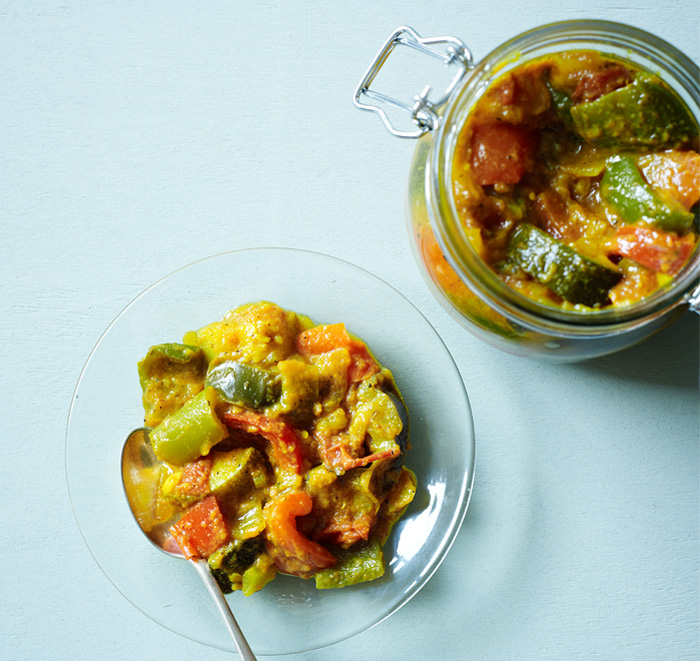 Emma Macdonald from The Bay Tree Preserving – pre-order from Amazon

Mediterranean vegetables make this an unusual alternative to the usual piccalilli and would make a lovely summer variation, particularly if you have a good supply of courgettes, peppers and tomatoes. You can serve it hot or cold.

1. Sterilize enough wide-necked jars with non-metallic, vinegar-proof lids, or preserving jars, so that they are ready to use.

2. Heat the oil in a preserving pan, add the aubergines, courgettes, peppers, onions, tomatoes and garlic and fry for about 15 minutes, stirring frequently, until the vegetables are tender. The vegetables should be soft but not mushy.

3. Meanwhile, put the flour, cinnamon, nutmeg, turmeric, oregano, black pepper and salt in a bowl. Add 2 tablespoons of the vinegar and blend together until smooth.

4. Pour the remaining vinegar into the pan. Add the sugar and heat over a low heat, stirring until the sugar has dissolved.

5. Stir the spice mixture into the pan. Slowly bring to the boil, stirring all the time and then cook for 2 minutes until thickened. Season with salt if necessary.

6. Spoon the piccalilli into the warmed, sterilized jars. Seal immediately, label and store in a cool, dry, dark place.

7. Leave to mature for at least 1 month before using. Refrigerate after opening.

Follow Me!
The five best juices and smoothies for summer