– Extract from Chocolate  by Jennifer Donovan.

Cocoa beans, from which chocolate is derived, are a product of the cacao tree. This is believed to have originated in the tropical areas of South America, although the exact location is a source of some dispute. A relatively delicate plant, the cacao tree needs protection from wind and a good amount of shade; it usually bears fruit in the fifth year of cultivation in natural conditions. Although there are about 20 different varieties of cacao plant, only three are widely used in the making of chocolate—Forastero, Crillo, and Trinitero.

The fruit of the cacao plant, known as “pods,” contain between 20 and 50 cream-colored beans, and it takes about 400 beans to make just one pound of chocolate. The beans are fermented, dried, cleaned, and roasted. Then the roasted beans are ground to produce a thick cacao liquor, or cacao mass, and finally pressed to extract the fat, known as cocoa butter. 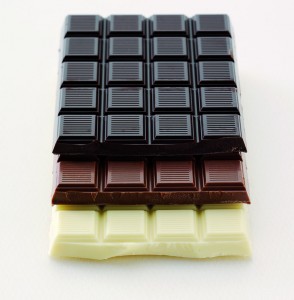 Types of Chocolate
There are a number of basic categories of chocolate. The first is dark chocolate, sometimes referred to as bittersweet or semi- sweet chocolate, or couverture. This is designed for both eating and cooking. Look for chocolate with a high cocoa content (usually marked as a percentage on the label). Ideally, the percentage should be somewhere between 70 and 85 percent, although it is important to remember what you are ultimately using it for.

The most readily available chocolate tends to range between 60 and 70 percent, which renders good results, though higher percentages do exist.

Milk chocolate, also commonly available, generally contains less than 3 percent cocoa butter and has sugar, milk powder, and vanilla added. It is not as successful in baking and cooking as dark chocolate, but you can use it as a substitute in mousses, fillings, drinks, and cookies, particularly if they are destined for children, who prefer the less bitter flavor. Again, for the tastiest results, look for good-quality milk chocolate—many manufacturers use vegetable oils, artificial flavors, fillers, and milk solids in their products. Organic varieties of chocolate are a good choice here.

White chocolate, another widely available product, is technically not chocolate at all because it does not contain cacao liquor—it is made from cocoa butter, sugar, milk, and vanilla. Although not a pure chocolate, white chocolate is still very popular and gives good results in cooking.

To know more about chocolate and be guided through a range of delicous chocolate recipes, take a look at Chocolate by Jennifer Donovan. 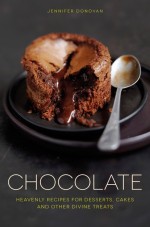 The Nutritional Values of Spelt
Scroll to top