There’s not much that can’t be fixed by a generous helping noodles, except maybe a snappy recipe to match. Chilli, garlic and a whole lot of seasonal veg makes this vegan dish ideal for a punchy midweek meal, perfect for a Tuesday night! Taken from Rose Elliot’s Complete Vegan, you can use straight-to-wok noodles or dried ones, remember to follow the instructions on the packet.

From Rose: ‘Meg is my middle daughter, a busy doctor and mother of three, and this is one of her fast after-work recipes. Meg uses ready-to-use or ‘straight-to-wok’ noodles; if you prefer to use dried ones, prepare according to the packet instructions.’ 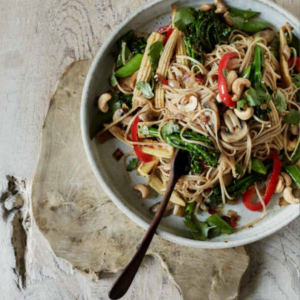 1 Heat the oil in a wok or large saucepan over a medium-high heat, add the onion and cook, stirring, for 3–5 minutes until starting to soften. Add the broccoli along with a splash of cold water, cover the pan and increase the heat to high. Steam the broccoli for 5 minutes, until the stems begin to soften and the water has evaporated.

2 Add the garlic, chilli, ginger, (bell) pepper, mushrooms, sugar snap peas and sweetcorn, and cook for 1–2 minutes until the vegetables are cooked. Stir in the noodles and warm over a low heat until the noodles are heated through. Add soy sauce, to taste.

Have a hankering for sushi but looking to keep it vegan for #Veganuary? We’ve got the recipe for you! This Easy Vegan Sushi with Avocado recipe from Rose Elliot’s Complete Vegan – quick and delicious, ideal midweek meal inspiration. 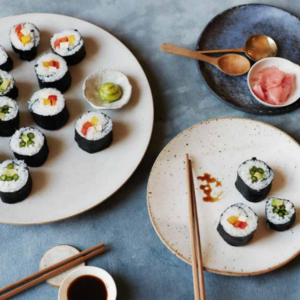 1 Place the rice in a saucepan with the water and bring to the boil, uncovered. Cover, reduce the heat and cook for about 12 minutes, or until the water is absorbed and the rice cooked. Allow to cool for a few minutes, then stir in the rice vinegar and sugar. You can use the rice to make the sushi as soon as it’s cool enough to handle.

2 To make the sushi rolls, place a piece of nori, shiny-side down, on a board and lightly cover it with the rice, leaving a 1-cm (½-in) gap at the end farthest from you. Place a row of red (bell) pepper strips on top of the rice, at the end closest to you, about 2.5cm (1in) from the edge. Lay some asparagus spears next to the red pepper and a line of avocado strips next to that. Fold over the edge of the nori closest to you, quite firmly, then continue to roll the nori up, like a Swiss roll. Continue to make sushi rolls in this way until all the ingredients have been used up, then refrigerate until required.

3 To serve, trim the two ends of each roll (these tend to be a little untidy), then cut the rolls into 4 or 5 pieces. Place them, filling-side up, on a serving plate and sprinkle with a few toasted sesame seeds, if you like. Serve with the soy sauce for dipping – it’s nice to give each person their own tiny bowl of sauce – and some wasabi paste and pickled ginger. 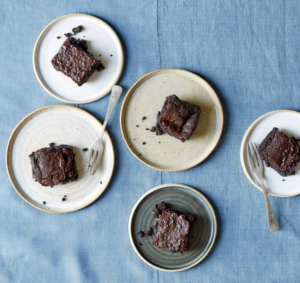 From Rose: ‘These brownies are the result of my many attempts at making ‘the perfect vegan brownie’. For me, it’s perfect just as it is, but if you want it even more ‘fudgy’ you can simply double the amount of chocolate and bake the brownies for a few minutes longer. Either way, they are quite delicate when they first come out of the oven, but they soon firm up. In fact, they are even more delicious the next day and keep well… if they are allowed to. I hope you will enjoy them.’

4 tbsp soy or other plant-based milk

2 Line the base and sides of a 20cm (8in) square baking tin (pan) with 2 strips of good-quality non-stick baking paper (so that the bottom has a double layer of paper).

3 Break the vegan chocolate into pieces and put them into a saucepan along with the vegan butter and sugar. Heat gently until melted, then remove from the heat.

4 Meanwhile, mix the milk with the vinegar in a bowl and set aside to curdle.

5 Sift the flour, salt, baking powder and bicarbonate of soda (baking soda) into the chocolate mixture and stir until well combined. Add the curdled milk and mix quickly with a wooden spoon until combined, then thump the pan on the work surface to get rid of any air bubbles. Tip the mixture into the prepared tin, spreading it to the edges, then thump the tin sharply on the surface once again.

6 Bake for about 20 minutes until firm.

7 Let cool, then cut into pieces in the tin. The brownies become firmer and fudgier as they cool. They keep well stored in a tin.

Happy #Veganuary baking everyone! These brownies hit the spot every time, forgoing meat shouldn’t mean you forgo your favourite foods – especially in a time when everyone deserves some comfort food ❤️

A very Happy (almost) Thanksgiving to our American followers! If you’re on the lookout for a vegan celebration meal, look no further than Rose Elliot’s Complete Vegan by @roseelliot.mbe. Rose’s recipe for this nut roast is pleasantly festive, making it a perfect, seasonal addition to a plant-based Thanksgiving spread! Save the recipe for Christmas too, you’d be nutty not to ???? ⠀ 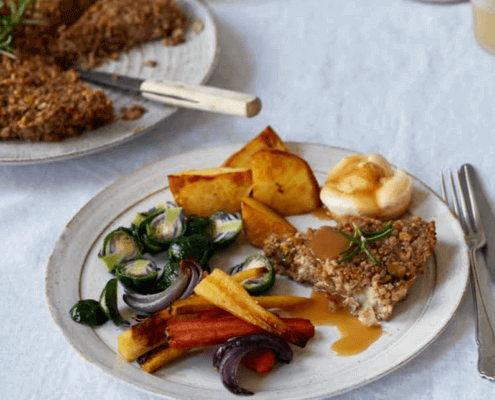 Heat the olive oil in a frying pan (skillet) over a low-medium heat, add the onion and fry for 10 minutes, until translucent.

Meanwhile, put the nuts and bread into a food processor and process until fine.

Dissolve the Marmite (yeast extract) in the hot vegetable stock and add to the breadcrumb mixture along with the mixed herbs to form a soft mixture. Season with salt and pepper to taste.

Tip the nut mixture into the prepared dish or tin and bake for 30 minutes until golden brown.

Let stand for 5 minutes before slicing.

Have a wonderful Thanksgiving no matter where you are or what you get up to! Give @nourishbooks and @roseelliot.mbe a follow for more vegan and plant-based foodspiration.

Join us in celebrating #WorldVeganMonth this November! It’s been amazing to see how far the vegan movement has come over the years; here at Nourish, we have made it our mission to aid and assist the movement, by publishing the ideal accompanying vegan guidebooks to help you join in and celebrate.

Take the Living on the Veg! quiz to get matched with the Nourish cookbook that will be your #WorldVeganMonth companion – share your results with us on social media using the #LivingontheVeg hashtag!

This winter, we published Rose Elliot’s Complete Vegan, the ultimate bible of plant-based eating by the renowned vegan cook. We spoke to her about what lead her from her long-held vegetarian diet to going fully vegan. 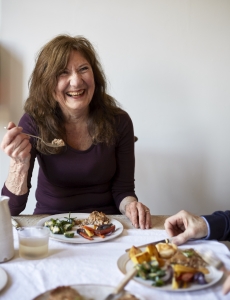 that they were dead. I asked her whether they had been killed specially for us to eat, and I can still remember the shock that ran through me when she replied that they had. As it happened, she and my father were practically vegetarian; they had given up red meat some time ago, but still ate fish and chicken occasionally. I think my outburst that night hastened their transition to being complete vegetarian, which wasn’t particularly easy in those days (the early 1950s). My younger sister and I were the only vegetarians at our primary school; vegetarian lunches could not be provided, and our wholemeal salad sandwiches, carrot sticks and salad leaves, nuts and raisins, and bottles of fresh juice were objects of stunned amazement to the rest of the school. It was difficult at first, but we got used to it, and I really admire my mother for being a pioneer of healthy and compassionate eating.

I followed her lead and remember sending to the Vegan Society for information and my sister and I trying to make vegan milk from whole soya beans in our little kitchen at home when I was about 12 years old. It involved soaking, boiling and sieving (no liquidizers or food processors then), and I think we used every saucepan available. My sister who was tackling the mountains of washing up I had created, remembers to this day how, with the kitchen piled high with used bowls, sieves, saucepans, jugs, and every other piece of equipment you can imagine, I said brightly ‘now let’s try making vegan butter…’ 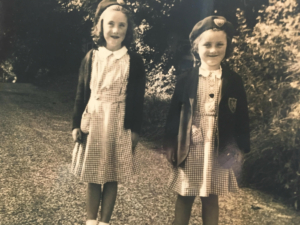 Being vegan – even, let’s face it, being vegetarian – was so difficult in those days. But the desire never left me. I was ‘practically vegan’, giving up eggs and dairy produce; and then reverting back to being vegetarian, for a long time. Over the years however my vegan times became longer and longer; I wrote two vegan cookbooks, The Green Age Diet, and Vegan Feasts, and included vegan variations and alternatives in my vegetarian cookbooks. I have been wanting to write a more comprehensive vegan cook book for some time, so I was thrilled when Nourish approached me with the possibility of writing this book: Rose Elliot’s Complete Vegan. It’s the result of years of vegetarian/vegan cookery writing which started in response to the many requests I had for the recipes for the dishes that I cooked up for the visitors to the retreat centre where I worked from the age of 16.

Writing this book has been such a joy; the enthusiasm everyone has expressed for knowing more about the vegan diet and way of life; and for trying the food; the challenge of ‘veganizing’ some of my most popular vegetarian recipes from the past, and of creating new and original recipes that are vegan in their own right. I have loved seeing the mixture of pleasure and amazement on the faces of those who have tasted my inventions. And I have been so grateful as well to those dear friends and family who have been kind enough to share their own favourite recipes and inventions with me for this book: in particular, my three daughters, who have travelled the vegan journey with me, and given me for this book some wonderful recipes that they have created.

Although I was vegetarian from birth, it was some years before I became completely vegan. During that time, public awareness of the effect of our food choices upon the planet, wildlife, the rain forests and indeed our own health have become more and more evident. I truly love making, eating (and writing about!) vegan food, but it also gives me great satisfaction to know that in doing so I can, and I am, helping to protect the wildlife, the animals, and the whole ecology of this beautiful planet. As Joseph Poore at the University of Oxford, said: ‘a vegan diet is probably the single biggest way to reduce your impact on planet Earth, not just greenhouse gasses, but global acidification, eutrophication, land use and water use.’ The foods we choose to cook and eat truly can change the world. 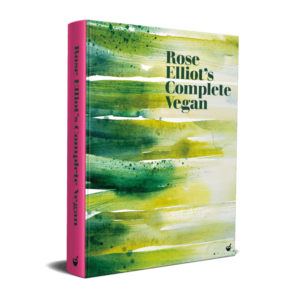