We are approaching World Vegan Month, which punctually runs in November every year starting on November 1st, and celebrates a plant-based diet.

If you feel inspired to try and start a vegan diet, the first step is to choose the right ingredients to cook with at home, which will help to keep the costs down. In The Vegan Cookbook – 100 of the Best Vegan Recipes, Adele McConnell lists the best vegan ingredients to start with in order to plan a well-stocked storecupboard. Although some of the foods may be unfamiliar, Adele has chosen them for their health benefits. You can stock up gradually and to save costs you can buy a lot of pulses (such as peas, beans and lentils) in bulk.

Almonds are high in magnesium, vitamin E, phosphorus and calcium. They are a great convenience snack and they make incredible milk.
Antipasti vegetables such as sun-dried tomatoes and artichokes stored in oil in jars (or artichokes in brine from a tin), are handy to add to a tomato based pasta sauce for a quick and easy dinner or to serve on a platter with vegan cheese and biscuits. 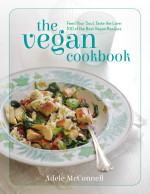 Follow Me!
Hangover Helpers: The Top Foods to Eat

Pimp My Rice Recipes for you to try!
Scroll to top