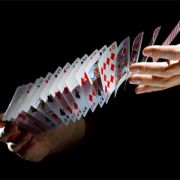 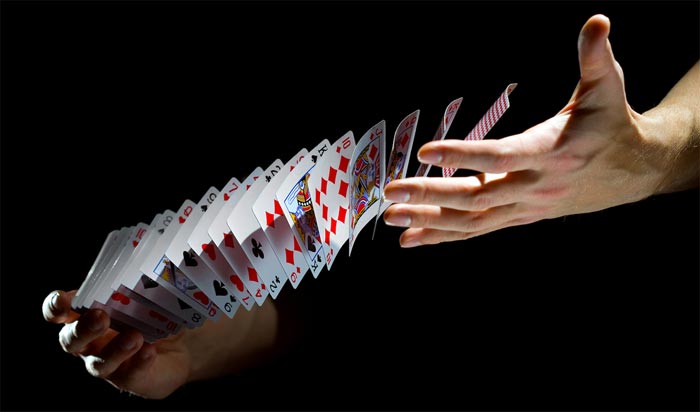 Eight-times World Memory Champion Dominic O’Brien shows you how easy it is to memorize a deck of playing cards. In fact, during a Guinness World Record attempt in 2002 he used this technique to memorize 2808 random playing cards from 54 packs after seeing each card only once! Now, that would take some serious practice, but if you use Dominic’s memory technique below, you’ll have an ace party trick up your sleeve.

‘My inspiration for taking up memory training came from watching international memory master Creighton Carvello on television memorizing a deck of shuffled playing cards in the incredibly fast time of two minutes and fifty-nine seconds. The cards were dealt our one at a time, one on top of the other: in other words, he had just a single sighting of each card. How, then, was it possible for this man to link 52 unconnected pieces of data together in less than three minutes? It was this question that inspired me to take up a deck of cards and try to fathom the answer for myself.

It soon dawned on me that what i needed to do was visualize each of the 52 cards as a particular person. I could then use a memory technique called the ‘Journey Method’ to preserve the order of the cards.

After three months of intense training, not only could I memorize a whole deck in less than three minutes, but I was now memorizing multiple decks of cards. With this simple and fun technique, it is possible to memorize multiple decks. But for now, here is how you too can memorize a single deck of cards.

How to Memorize a Deck of Cards

You must first assign a person to every card between Ace and 10. We’ll deal with the court cards later. Cards can be treated like numbers. The easiest way to assign a person to each card is to translate them into pairs of letters which then represent the initials of names (know as the Dominic System). The number of the card gives you the first letter. So, taking 1 to be Ace conveniently gives us the letter A. 2 becomes B, 3 becomes C and so on. To make things simpler, the 10 becomes O. The suit provides you with the second letter:

In a notebook, list the 10 cards from 1 (Ace) to 0 (10) in a column. Make for more columns for the suits: Clubs, Diamonds, Hearts and Spades. Fill in all the columns by converting each card into a pair of initials. For example, the Ace of Clubs becomes the initials AC; the 5 of Diamonds becomes ED; the 8 of Hearts becomes HH; and the 10 of Spades becomes OS.

It’s best to go with the first name that pops into your head when you read the initials. That instant reaction suggests you’ll be able to remember the person better. Imagine them with props or doing something that reminds you of them – for example, Oliver Stone could be using a film camera, or Hulk Hogan could be lifting weights. Have fun with it!

Now we need to deal with the court, or face, cards. Start by looking at the faces of each card: if their faces resemble any people you know, use that particular person to represent the card. If not, then you need to decide on a character for them. Here are some examples below, based on the associations I make with each suit: Clubs make me think aggression or golf; Diamonds represent actual diamonds and wealth; Hearts remind me of romantic leads in movies; and Spades (which resemble inverted hearts) represent villians. Make sure each character has their own action or prop.

Marilyn Monroe, dripping with diamonds, to represent the Queen of Diamonds

Draco Malfoy, mixing a potion, to represent the Jack of Spades

or Mohammed Ali, wearing boxing gloves, to represent the King of Clubs

Once you can identify each card as a person, you are ready to start memorizing your first deck of cards. However, I suggest you attempt 10 cards as a warm-up before tackling the whole sequence of 52.

2) Deal out 10 playing cards and convert each card into its character. Imagine seeing each character posted along each stage of your journey, performing his or her own actions. If the King of Diamonds is your first card, Bill Gates is counting diamonds at the first stage of the journey, and so on.

3) Replay your journey and jot down the order of the cards in your notebook.

Score 10 points for each correctly remembered card before a mistake is made.

If you feel ready, you can now try to memorize your first deck of cards. Follow the instructions given in the exercise above, only this time you will need to plan a journey of 52 significant stops and deal out the whole deck of cards. You can monitor your progress by timing yourself. Over the next four weeks aim to memorize a deck in less than 15 minutes. Eventually, with practice, you should be able to break the five-minute barrier!’

Do you want a brilliant memory?

Dominic’s book, How to Develop a Brilliant Memory, Week by Week, shows you how to power-up your natural memory gifts, and remember everything from names and faces, recalling jokes and speeches exactly when you need to, and working up to the truly impressive feat of memorizing a dictionary!

A Cheap Seafood Linguine en Papillote, to help you through to payday
Scroll to top