Light, bright and nourishing! This wholesome recipe was taken from The Part-Time Vegetarian’s Year by Nicola Graimes, we’re sharing it as part of #VegetarianAwarenessMonth this October! 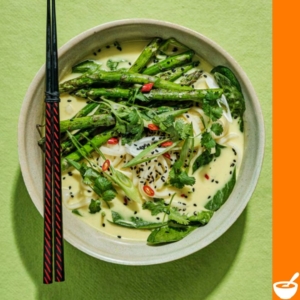 The broth is loaded with healthy and hearty ingredients such as ginger, turmeric and chilli, and plenty of seasonal veg. To give the broth extra flavour-infusing time, you could make it up to 2 days in advance, then leave to cool and store, covered, in the fridge – although this isn’t essential!

2 large lemongrass stalks, crushed slightly with the blade of a knife

Rejuvenating chicken or beef broth: Replace the vegetable stock with chicken stock, made from the bones of a roasted chicken, or a beef bone broth.

The Part-Time Vegetarian’s Year by Nicola Graimes is available to buy NOW!

How things have moved on since my original The Part-Time Vegetarian was published five or so years ago. The culinary climate has definitely changed for the better, with more of us choosing to eat plant-based meals on a regular basis. And to prove the point, research figures show that, impressively, one in three in the UK have cut down on the amount of meat they eat, with 60 per cent of vegans and 40 per cent of vegetarians having adopted their dietary preference over the last 5 years.

While the health benefits of a plant-based diet – the reduced risk of major chronic diseases, obesity and diabetes – are well documented, it has been the growing concerns over the environmental impact of intensive animal farming that has spurred much of the move towards flexitarianism, vegetarianism and veganism over the past few years. Recent research has revealed the hefty footprint of intensively reared meat, with the conclusion that the single most effective way to reduce our environmental impact is a global shift towards a flexitarian diet that contains only small amounts of ethically reared, good-quality meat and dairy, eaten once or twice a week with a plant-based diet being predominant.

For me, one of the most exciting aspects of the shift towards flexitarianism is how inspiring and creative plant-based cooking has become. Nowadays, no chef worth their salt would forget to include a vegetarian or vegan dish on their restaurant menu. What’s more, many openly relish the exciting culinary possibilities of plant-based cooking.

As a family, we have become more mindful of what and how we eat over the years. Like many families, our eating preferences vary and I’m constantly on the look-out for meals that both meet our differing tastes and that can be adapted if need be. Whether we eat meat just once a week; just at weekends; as part of an extended family get together; for a dinner party; or not at all, I’ve found that flexitarianism is a way of eating that can be moulded to suit our individual needs.

I’m hoping that this sense of versatility, adaptability and variety shines brightly in the recipes in this book. Importantly, vegetables always take centre stage with a focus on what’s in season. Where meat (or seafood) are included they are in cost-, eco- and health-conscious small amounts and treated as a garnish, side, topping or second to the plant-based components of the meals. At the heart of this book is the growing relevance of a mindful connection with what and how we eat. 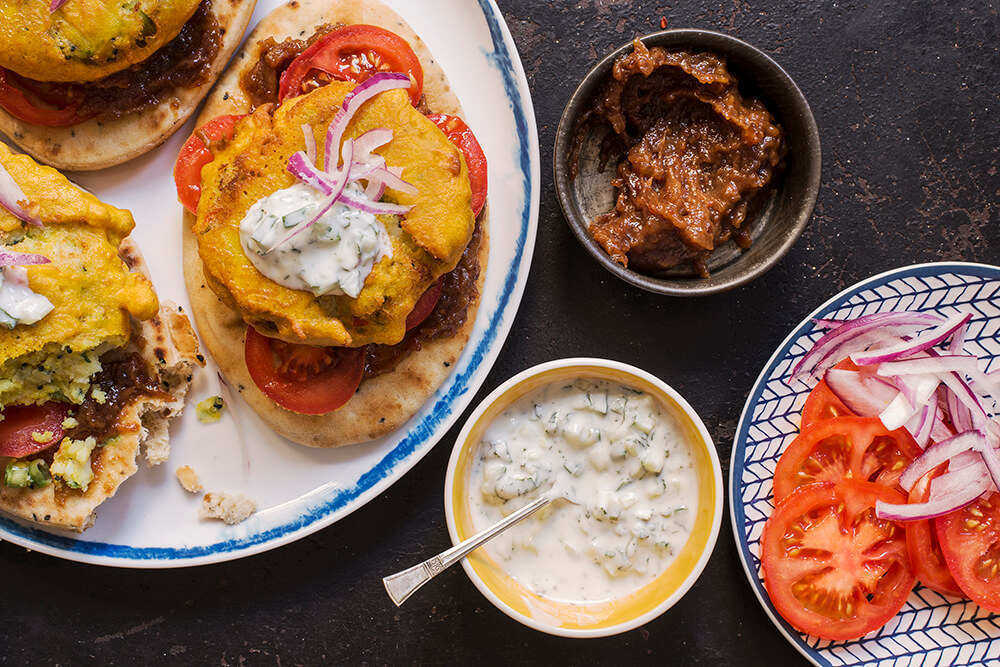 Extract from The Part-Time Vegetarian by Nicola Graimes

An Indian twist on the regular veggie burger, these spiced potato patties are coated in a gram flour batter and cooked until the outside is crisp and golden. You could make the pre-battered potato patties a few hours ahead of serving, if convenient. 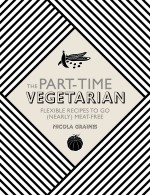 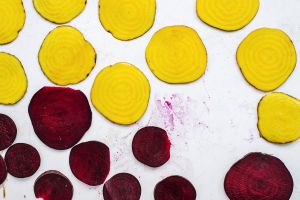 It has been named as one of the top food trends of the moment… it is called ‘flexitarianism’ – vegetarians who occasionally eat meat or fish and meat-eaters who regularly include plant-based meals into their diet.

I have picked up on this burgeoning trend with my new book Part-time Vegetarian, due to be published in late September. The cookbook includes over 100 vegetarian recipes, many of which can be adapted to include meat, seafood or poultry, if so liked.

If you’re keen to reduce the amount of meat you eat or you are looking for delicious adaptable meals, the Part-time Vegetarian shows how easy and tasty it can be.

Here are some simple tips to get you started: